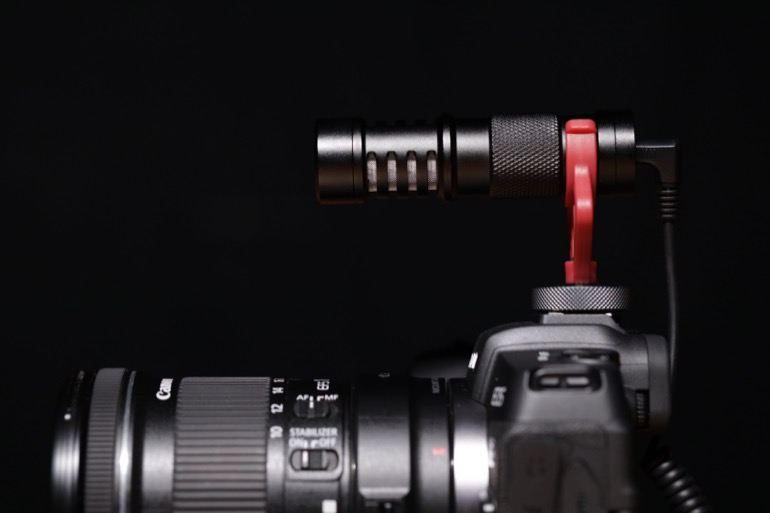 If you’re looking for a compact and lightweight microphone to place on top of your DSLR or mirrorless camera, the new PFY Voice is worth considering.

PFY has been making camera gimbals for a number of years now. But now they’re expanding into other photo and video accessories. The PFY Voice is their first audio product and it looks to be a winner right out of the gate.

The PFY Voice is a camera-mounted shotgun mic that is small enough that you can leave it on top of your camera pretty much permanently without adding any bulk, or feeling like the camera is “rigged up.” That way you’ll always have audio that is far better than an internal microphone, while still maintaining your camera’s small footprint. 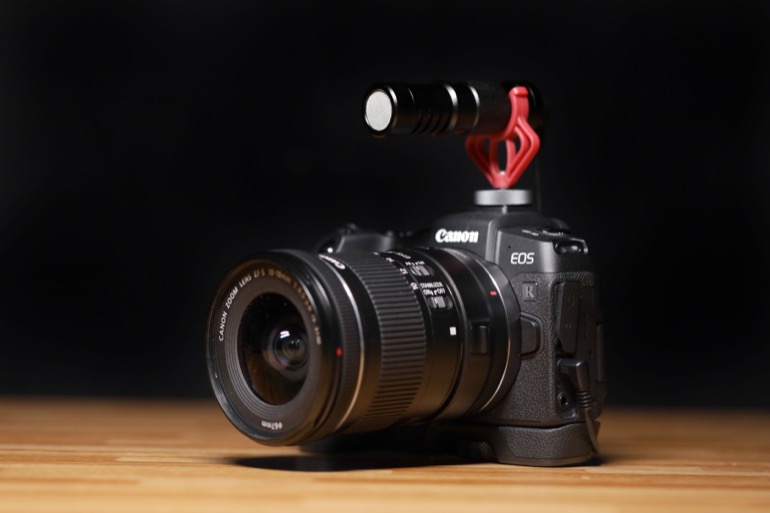 To power the mic, the Voice can be used with any DSLR or mirrorless camera that sends plug-in power through its mic port. That keeps the mic very compact and lightweight, with no need for batteries or an on/off switch. 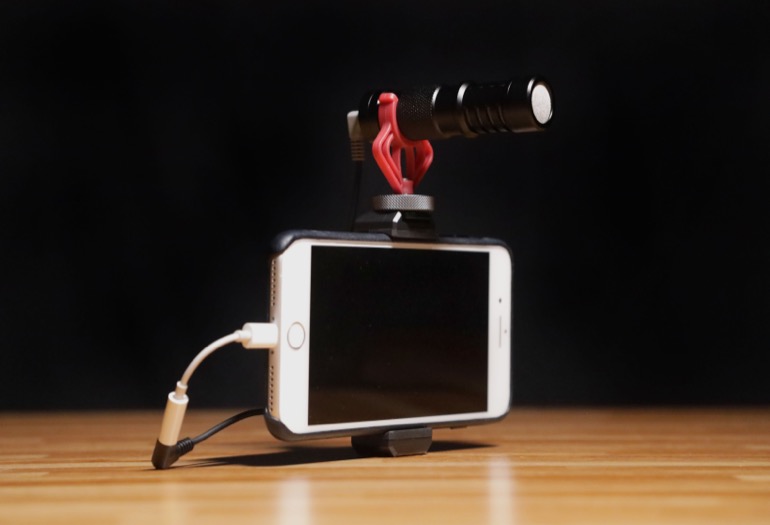 The PFY Voice is only about 3 inches long and weighs an ounce and a half. Its tiny size makes it suitable for just about any small camera, including smartphones. To facilitate this, PFY includes a smartphone mount with the PFY Voice, as well as a TRS to TRSS cable. If your smartphone (or tablet) doesn’t have an audio jack, don’t forget to buy an adapter, like the Apple lighting to 3.5mm headphone jack adapter.

Also included in the PFY box is a furry windscreen, which fits perfectly over the front of the mic capsule, a short coiled 3.5mm cable that is swappable with the TRSS one mentioned above, and a shoe adapter with a built-in shock absorber. 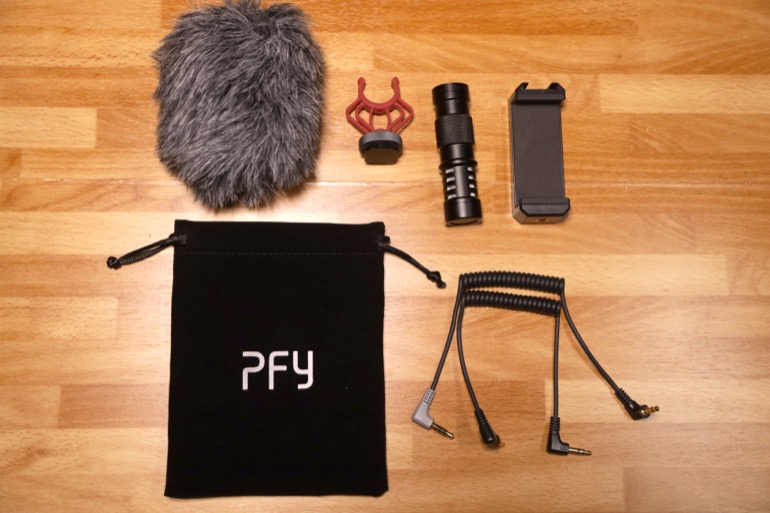 Our first impression of this microphone is that it looks to be very well designed and built. The microphone body is made from CNC Aluminum compact housing, which gives it a solid feel without adding much weight. 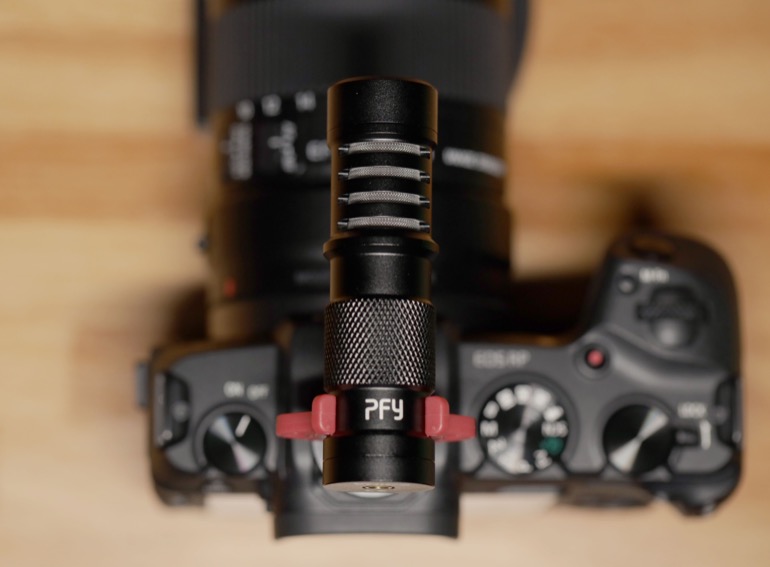 We’re quite pleased that everything to make the mic work is included right out of the box. You don’t need to buy an additional battery, or cable, or shock mount. Even the furry deadcat is included. And the fact that a TRS to TRSS cable is included is really impressive. It’s nice to have a mic that works for both your camera as well as your smartphone.

At the bottom of the shoe adapter is a ¼-20” thread, so you can also attach the PFY Voice to a camera cage, accessory mount, gorilla pod, you name it. 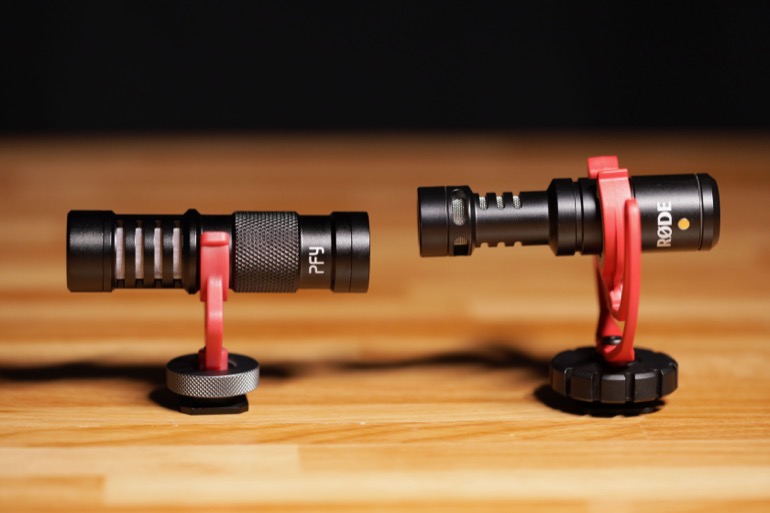 It’s impossible not to compare the PFY Voice to the RØDE VideoMicro. The VideoMicro has been out for a few years and has become a staple for anyone needing a tiny mic on top of their small camera. We’ve regularly used one on top of several cameras, most recently the Canon EOS R.

So how does the PFY Voice differ from the VideoMicro? Well for starters, they are almost identical in size and weight. They both have a 3.5mm jack on the back, they use plug-in power, they come with a furry windshield, and they’re both meant to be used with action cams and smart phones in addition to DSLRS and mirrorless. 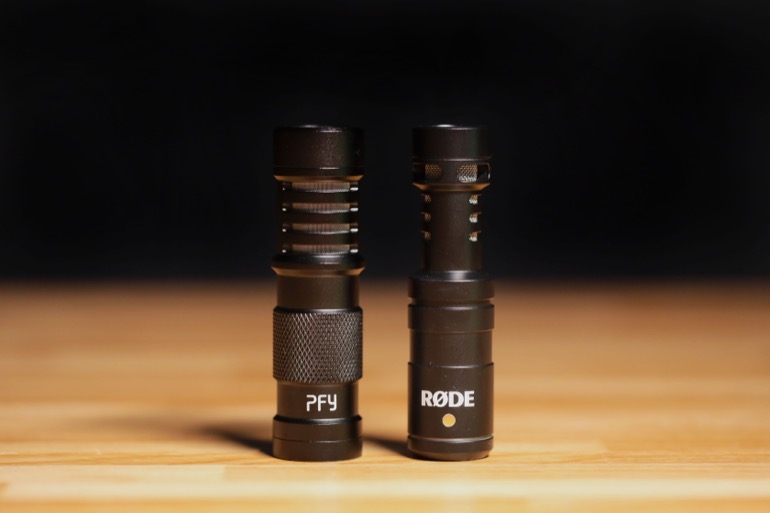 PFY has told us their transducer is a special electric condenser that makes their mic sound better than others. But looking at specs alone, these two cardioid mics have very similar signal to noise ratio and sensitivty. The PFY Voice frequency range does have a little more on the low end - 35hz vs 100hz on the Rode.

There’s a slight difference in aesthetics for the shock mount, but they both perform adequately. The PFY Voice is also a little cheaper than the VideoMicro, and it includes that smartphone clip, but it’s not a big price difference.

So really it comes down to personal preference for which of these two mics you get. For our buck, we’re very happy that the Rode VideoMicro now has solid competition, with the PFY Voice. It’s a solid mic for a very affordable price. The build quality, sound, and total package are all quite good for the first microphone from PFY. 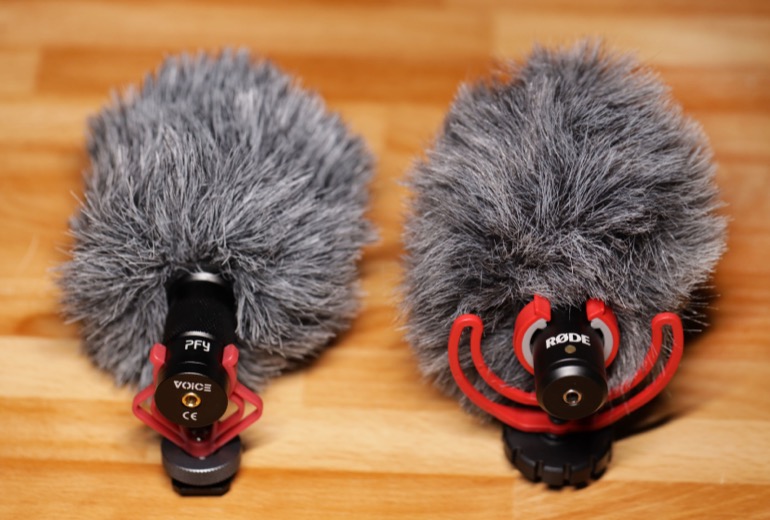 ​How does the PFY Voice Sound?

As for how they sound, to our ears they both sound quite good for how tiny these mics are. It makes sense, though, because if you’ve ever opened up a Rode VideoMic for example, the actual mic capsule and electronics components take up a very small amount of space near the camera shoe, while the rest of the mic is just a long hollow plastic tube that creates some directionality with its interference slots.

To our ears, the the PFY Voice sounds more full and bassy than the Rode VideoMicro. And it’s definitely a lot more sensitive. We had to turn down the gain quite a bit on the PFY Voice. That’s a good thing because you can use less of your camera’s internal preamp, which is generally not very good. 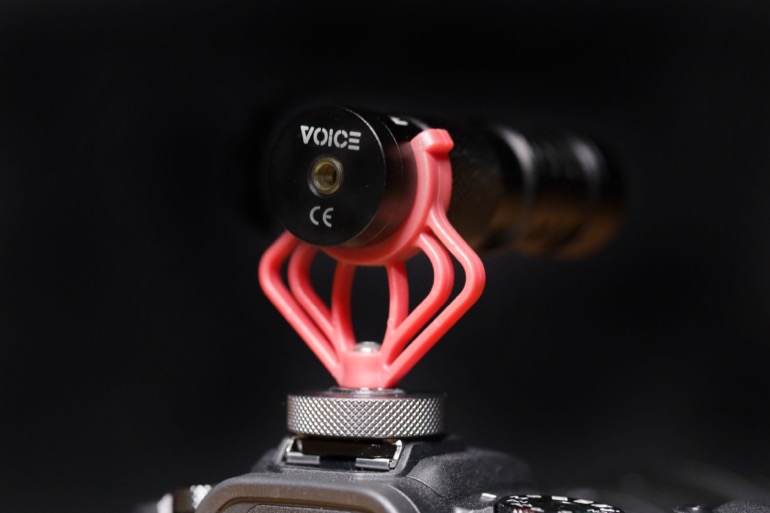 ​On the negative side, we experienced an issue with the PFY Voice cutting out anytime we handled the microphone with a little force. We’re not sure if it’s a poor soldering connection, or the electric condenser being overly sensitive to noise and movement, but it’s something to be aware of.

​For that reason, we would not recommend this mic on an action cam or if you plan to physically walk or run a lot while capturing essential audio. For normal shooting scenarios, however, the mic will do great. We’re impressed with the overall sensitivity and sound quality coming out of this little mic, and for the price and what you get in the package, it’s a good deal.