Going live on Wednesday November 27, MZed is having their biggest sale yet! Here are the major discounts (no code necessary): 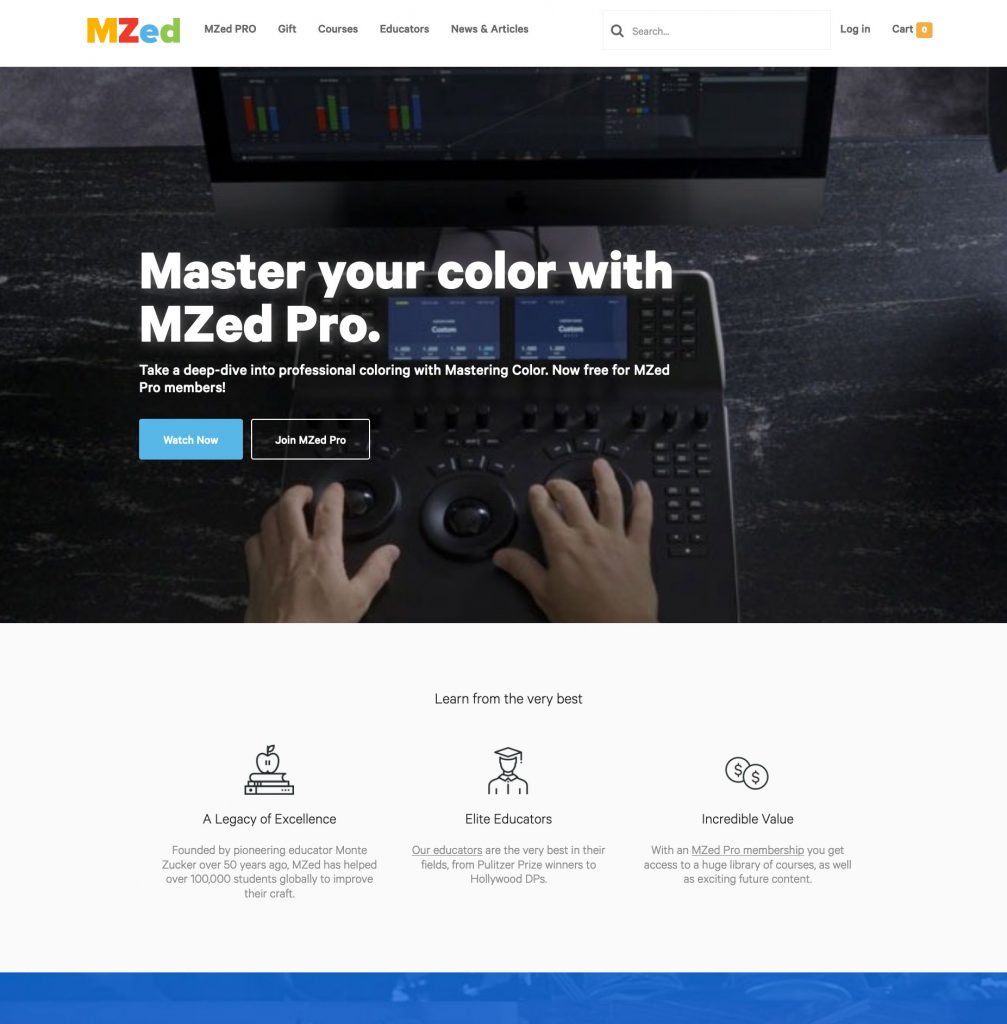 If you want to learn filmmaking, right now you have two major options: either enroll in a film school, or start watching the thousands of online tutorials available on Youtube.

But recently MZed has offered an alternative source of education, for anyone seeking online filmmaking tutorials from the comfort of their home or office, but with courses that have structure and professional expertise that are lacking in Youtube video tutorials.

In this article we take a look at everything MZed has to offer, and decide whether their subscription plan is worth the cost.

MZed was founded in the 1960s as a workshop and education source for photographers, created by photographer Monte Zucker (hence the “MZ ed” name). Back then, most photography training took place at formal art schools, and if you didn’t enroll in a school, then you learned from magazines or books.

Monte’s in-person workshops and seminars brought photography education to a mainstream audience, offering a training experience that was better than just reading books, but a lot more do-able than enrolling in a school. 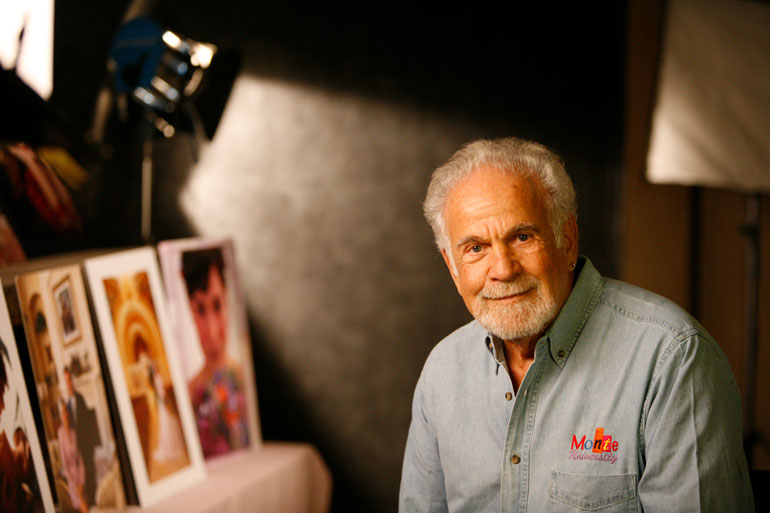 ​After Monte Zucker passed away in 2007, his long time assistant Jeff Medford took the reins and saw that filmmaking was rapidly spreading in interest, thanks to the DSLR revolution. At first Jeff combined photography and filmmaking with a series of workshop tours that catered to both photographers and filmmakers.

Then in 2013 MZed partnered with Saturday Night Live Director of Photography Alex Buono to create the Art of Visual Storytelling tour, which seemed to have come out at a perfect time when the film look was suddenly within reach for practically anyone who had some DSLR gear and a desire to learn.

Alex Buono jumped on early DSLR and prosumer cinema products at SNL, where he created some of the world’s most watched sketches, usually with only a few days turnaround. His lessons were enlightening to audiences, who saw how pro commercials and even features were being made with the gear they had at home. New tools like the MOVI gimbal and Canon’s cinema cameras were making it even easier for people to realize their filmmaking dreams. 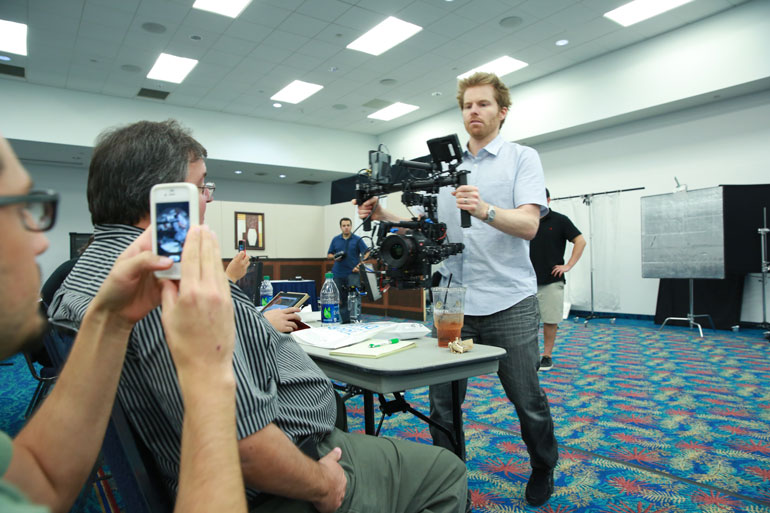 Filmmaking workshops and master classes took off quickly, with early DSLR adopters like Vincent Laforet, Philip Bloom, and Shane Hurlbut taking the lead with their in-depth online filmmaking training and how-to guides. But if you wanted to attend all the workshops and participate in the online training, you would have to 1) travel a lot, and 2) pay a ton of money.

It was simply not practical for film students to take advantage of all the filmmaking education that was being offered. And so, many budding filmmakers took to learning from Youtube tutorials, which are free. And there’s admittedly a lot to learn on Youtube, especially since many of the Youtubers are themselves established filmmakers with a lot of experience and knowledge to impart.

But you have to wade through a lot of hype videos and gear reviews to get to the meaty stuff. And the more Youtube you watch, the more you go down a rabbit hole of watching related videos, and before you know it you’re spending all of your time watching videos rather than learning to create them. It’s like watching so much Food Network shows that you don’t have any time to actually cook yourself. With structured learning, on the other hand, the whole point of a course is to provide you a suite of skills to tackle on your next production. 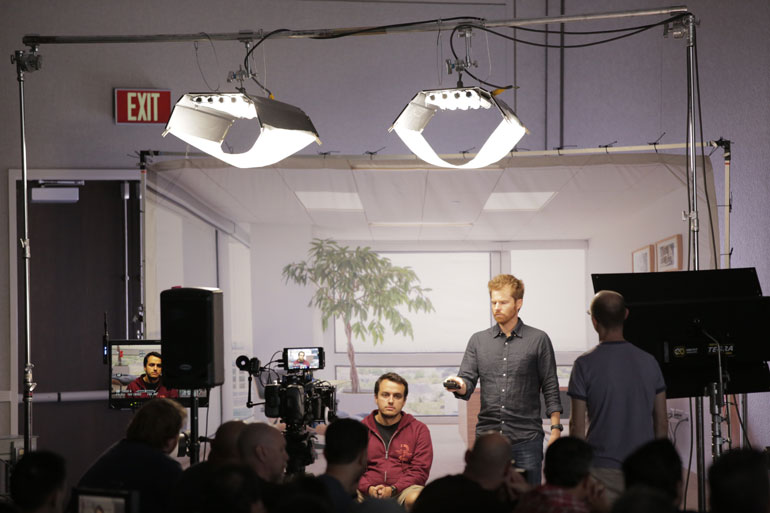 So here is where MZed once again finds a middle ground that is much needed in the education space. Just like Monte Zucker offered workshops that were better than magazine learning but required less commitment than enrolling in art school, the new MZed offers a filmmaking education that falls somewhere between Youtube tutorials and enrolling in film school.

MZed courses are more structured than youtube tutorials, as there are lessons or modules that make up a long course, and within the lessons there are often informative examples, slides, or animations to illustrate the lesson. 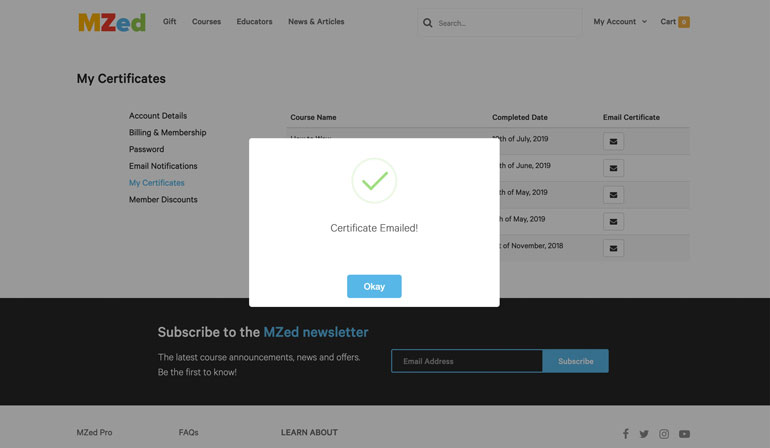 Recently they also added certificates that can be downloaded and printed after completing a course. That can be helpful for anyone looking to document their skills or knowledge when applying for jobs. It’s another way that MZed is a little closer to film school, by providing students with documentable evidence of their learning.

But while not everyone who is interested in filmmaking attends a film school, there are indeed a lot of young people who attend a traditional 4-year university and want to learn filmmaking on the side. Taking online filmmaking courses from a reputable web-based learning platform is a good way to add video production skills to any major, because video has become a necessary component of many careers.

But more than that, there are students who are enrolled in marketing or communications and want to go into corporate production or advertising, but their universities may not offer production courses. So in addition to taking traditional coursework for the degree, you could also find time each week to go through the online learning at MZed. 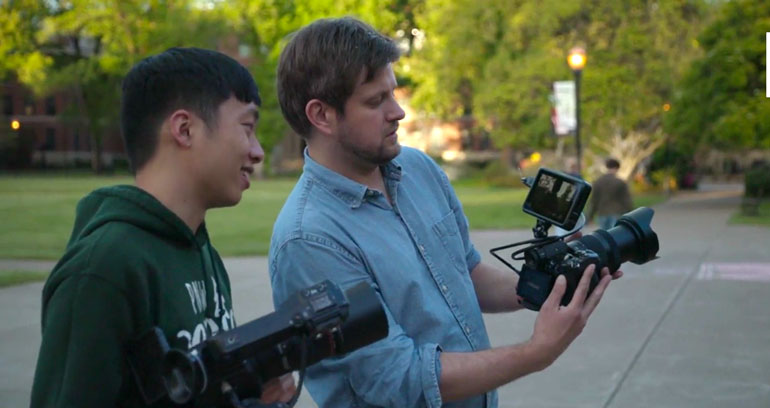 ​There are courses being added all the time, as it’s a lot less intensive to create an online course than it is to add a film program to a university college or division. In this way, MZed’s online offerings can stay more up to date than even a traditional film school. For example, there are courses about the newest ARRI large format cameras - how quickly do you think NYU could turn around and offer a similar course to their students?

So in summary, there’s a good argument for the existence of MZed in the current filmmaking ecosystem, somewhere between free online tutorials and film school. But it also provides an excellent supplementary education for students who are enrolled in a traditional 4-year university and want to take contemporary film courses that their school doesn’t offer them. Although there's no official curriculum, MZed does ​have a step by step course flow to learn filmmaking.

Finally we get to the important question: is MZed worth it? Now that we know the history and its current role as an online film school alternative, the question is, how much is it and is that a good deal?

First, do we think it’s better than the free tutorials online? Yes we do. Even if you watch reviews and guides from someone like Philip Bloom, the courses he’s created for MZed - Cinematic Masterclass and Filmmaking for Photographers - take a considerable amount of work to plan and produce. So you know you’re getting a lot more than a glorified vlog.

​Then there are other courses which have been available to purchase elsewhere, but are offered to MZed Pro members at a discount. Shane Hurlbut has created some amazing courses, for both individual purchase as well as through his monthly Inner Circle membership. So when he offers something like ​"Cinematography: Mastering the Image" or ​"Experience Lighting Masterclass," you’re getting access to some of his education at a huge discount.

And lastly a few of the courses were first created as touring workshops, like Alex Buono’s "Visual Storytelling" and Vincent Laforet’s "Directing Motion." To attend these workshops, you would have to pay for the travel and lodging (if the workshop city was outside of your local area), plus hundreds of dollars for admission. 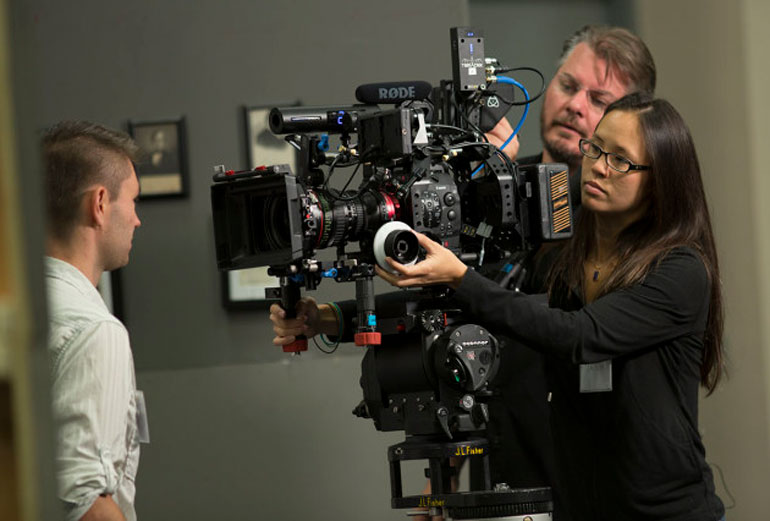 ​So if you were to attend every one of these workshops, and purchase each of the courses that MZed licenses, you would be paying over $60,000. That’s insane. Now, if you were to purchase every course at MZed - rather than going with the streaming-only MZed Pro subscription - it would cost you over $6,000. Better, but that’s still a lot of money.

That’s why the streaming subscription of $299 annually - or $25/month - is without a doubt one of the best deals in filmmaking education. We really believe in it, for both newbie students as well as working filmmakers who want to continue their education. 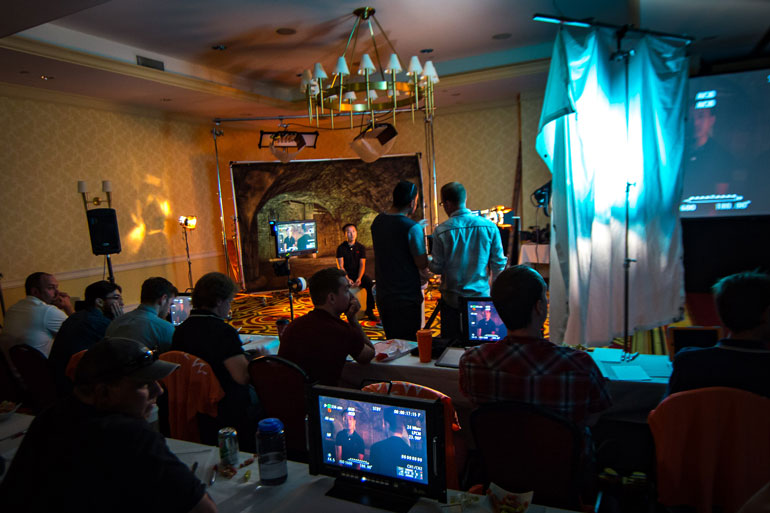 For that $25/month you get over 200 hours of masterclass courses on cinematography, lighting, audio, directing, editing, color grading, and specific guides to certain industry cameras. There’s enough variety that both newbies as well as advanced filmmakers will find enough value for themselves.

The bummer about the streaming component of the membership is that you do have to be online, and often the times we have for watching long-form educational content is when we’re on break, traveling, or intentionally powered off from the internet. However, MZed has been hinting at a possible iOS app coming soon that will allow offline viewing, without requiring members to purchase courses. That’s great news to our ears.

The thing about MZed is that it’s not the brand itself that you’re buying into, it’s the platform for educators and courses they are offering.

And the only real way to know if you’ll find those courses and educators worth your time and money is by trying them out.

Luckily a few of the courses have free lessons to watch, as long as you create a login. But you don’t need to subscribe to anything to watch them. 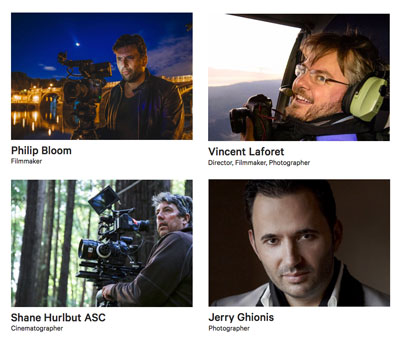 For example, the first 1-hour long lesson in the "Definitive Guide to DaVinci Resolve" is free to watch, and it’s an excellent overview of editing in Resolve.

But if you find even a couple courses are interesting to you, we do believe the value of the MZed Pro subscription is worth far more than the $25/month. Like mentioned above, it would actually cost 200x the membership price to be able to attend all the workshops and purchase all the courses that MZed licenses.

Give it a try, and if you find it’s not for you, MZed has a 7-day tryout period where you can get a full refund, as long as you don’t go crazy and watch everything in that 7 days.